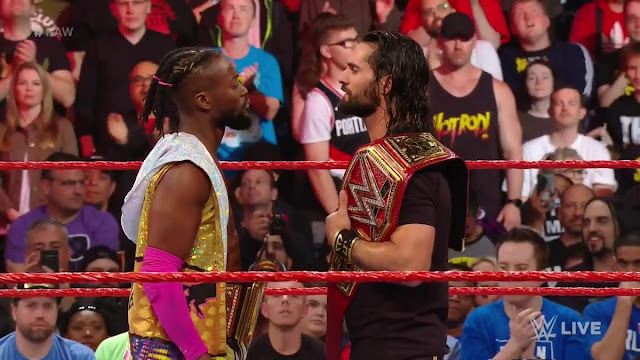 HOUR ONE
- New Universal Champion Seth Rollins makes his way to the ring. As the crowd chants, "You deserve it," Rollins replies, "No, we deserve it." Rollins claims he feels like he's been hit by a "mack truck," but also talks about getting back up. Rollins admits to using questionable tactics against Lesnar, but also says, "I didn't do anything to Brock that he wouldn't do to me." He tells the audience that Brock Lesnar and Paul Heyman flew to Las Vegas after WrestleMania and also hopes that they stay there and adds that he will be a fighting champion. New Day then makes their way to the ring with a huge pop. Kofi Kingston is with the trip and wearing his new WWE Championship title. Kofi Kingston announces that next week there will be a Superstar Shakeup, but they are there to celebrate. Kingston then talks about the possibility of unifying the championships in a winner take all match tonight on RAW and issues a one on one challenge to the Universal Champion. Rollins accepts.

- Baron Corbin makes his way to the ring and begins to brag about his WrestleMania 35 victory over Kurt Angle, who then comes out to interrupt him. Angle extends his hand to Corbin, but ultimately ends up putting him in an ankle lock. After Corbin runs out of the ring, Lars Sullivan makes his way to the ring. He and angle engage in a staredown. Sullivan then plants angle leaving the recently retired WWE Hall of Famer incapacitated on the ring floor. As the Brooklyn crowd chants, "Asshole," Sullivan unleashes a flying headbutt from the top rope and then exits the ring.

HOUR TWO
- Becky Lynch makes her way to the ring to huge applause. She refers to herself as "Becky two belts," reminisces about her journey, and challenges Rousey to a future match. She also claims the McMahon Family will probably hand Charlotte Flair the tag team titles to help her get over her WrestleMania loss. Lacey Evans then interrupts her, but Lynch waits for her on the entrance ramp. The two engage in a staredown, but Evans throws a punch that lands solidly on Lynch's jaw. Evans then makes her exit, but is chased down by Lynch. The two women engage in a brawl on the entrance ramp. Lynch attempts the Disarmher, but Evans works her way out of the maneuver before the two women are separated by WWE officials.

- Seth Rollins is backstage and warns Kofi Kingston to, "Bring his A game because B+ isn't going to get the job done."

- Elias is backstage lying on a sofa while playing on his guitar. He laments the ruination of his performance last night by John Cena and reveals that he is no fan of rap music. Elias announces that he will perform his "rock opera" tonight.

- An unknown vignette airs featuring a dinosaur popping out of a box and laughing (yes, this actually happened)

- Dean Ambrose's last WWE match (vs Bobby Lashley) never officially gets underway due to a pre-match promo by Lashley, in which the former Intercontinental Champion said, "When you're gone, I'll take care of your wife for you.". The two men brawl and Dean Ambrose is left in bad shape after taking a brutal Lashley spear. Ambrose's real-life wife, Rene Young comes to his aid as the New York faithful chant, "Thank you Ambrose."

HOUR THREE
- Intercontinental Champion Finn Balor defeats Sami Zayn via pinfall *Zayn cuts a heel promo post-match calling WWE a toxic workplace due to this audience and their "ugliness." He continues, "Your lives seem so empty and so devoid of any meaning....you only get joy and satisfaction out of being critics." Zayn continues, "It's the only thing that gives you some sort of importance. You judge everything and everyone except yourselves because none of you have the balls to look inside yourselves because you know the ugliness and the cynicism that's inside you." He calls the audience WWE's "evil overlords." Zayn vows to come out each and every week to hold each fan accountable and leaves with, "See you in hell."

- Dana Brooke is backstage and offers Becky Lynch a congratulations, but says she isn't in the back of the line anymore. She promises to seize a championship opportunity.

- Elias is in the ring with an anti-Cena rap and says that the next one to interrupt him is a Dead Man. Then The Undertaker's music hits. The Undertaker then makes his way to the ring. Elias attempts to attack the Dead Man, but receives a big boot, a chokeslam, and a tombstone piledriver for his efforts