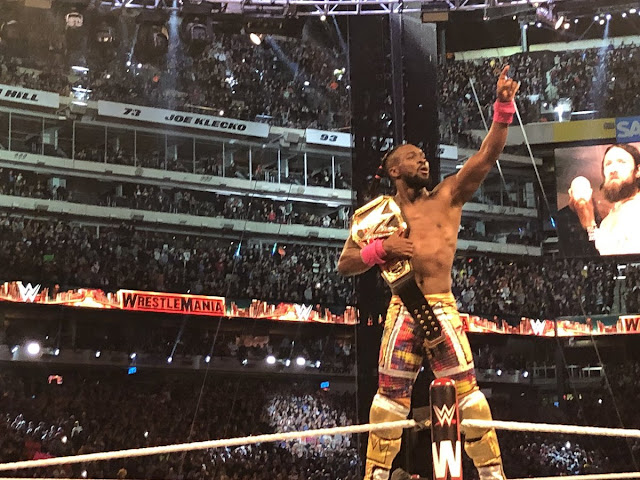 Subscribe to WWE Network & get your First Month Free! Get instant access to Pay-Per-View Events & Exclusive Programming - No Commitment Required!

WrestleMania 35
- Alexa Bliss opens the show and promises a WrestleMania moment with the snap of her fingers. She snaps and none other than Hulk Hogan makes his way to the entrance ramp to hype the crowd.
Toward the end of the segment, Paul Heyman makes his way out to the ring to complain about not being last. He threatens to leave, but instead introduces the opening match Seth Rollins vs Brock Lesnar. Lesnar brutally attacks Rollins before the bell rings giving him a clear advantage in the bout.

- Jerry Lawler is announced as part of the commentary team

- Paige is introduced to the commentary team

- Booker T is announced as a guest commentator

- Elias performs on drums, piano, and guitar simultaneously with the help of video. He is interrupted by John Cena, who is in full Thuganomics character. After performing an insulting rap with Elias as his target, Cena hits Elias with a five knuckle shuffle and an attitude adjustment.

- Shawn Michaels is introduced as a special guest commentator

- JBL is announced as a special guest commentator

RELATED: Top 5 Most Inspiring Moments From The 2019 WWE HOF Ceremony