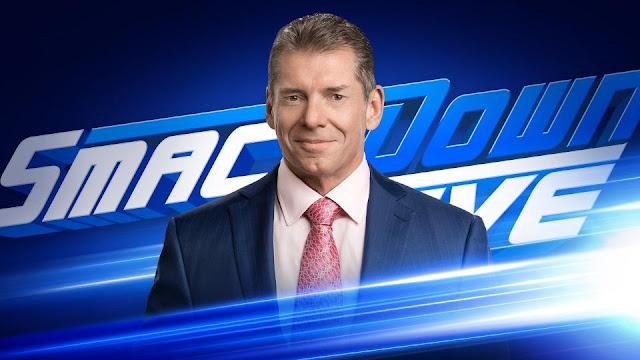 HOUR ONE
- Kevin Owens makes his way to the ring for a special hometown edition of the Kevin Owens Show. He speaks in French and the Quebecers roar in approval. Owens informs the audience that Vince McMahon will reveal, "the biggest acquisition in the history of SmackDown Live." Owens claims that the biggest Superstar in the history of SmackDown Live is already here because, "That's me." Owens then proceeds to introduce WWE Champion Kofi Kingston. Owens congratulates Kingston on his WWE Championship victory. Kingston appreciates the gesture and addresses the crowd in French. The audience approves with a, "Oui," chant. Owens notices that Big E is not with the group and Xavier Woods confirms that Big E was injured and further laments that much of the UpUpDownDown roster has been drafted to RAW. Owens also confirms that Woods and Kingston will later face Rusev and Nakamura. Owens offers his assistance to the remaining members of New Day as, "Big O," the third member of The New Day. Kingston asks, "Are you willing to wear a crop top?" Owens replies, "I'll think about it." Woods lists a number of activities including video game playing and pancake throwing. He also mentions groin thrusting and Owens obliges. Kingston asks Montreal if they'd like to see Kevin Owens as an honorary member of The New Day. The crowd approves settling the issue. Owens is then given a very tight ripped tank top and a unicorn horn before he gyrates with his new team.

- The New Day is looking for Kevin Owens backstage. They prep him for his initiation, which is eating a ridiculous amount of pancakes in just under six minutes. Apparently Big E once did the same and Owens gives his best effort.

- Charlotte Flair defeats Carmella (with R-Truth) via submission. Postmatch: Lars Sullivan makes his way to the ring and this time R-Truth is the victim.

HOUR TWO
- Becky Lynch makes her way to the ring with both championships in tow. She is interrupted by Ember Moon (who officially makes her way to SmackDown). Lynch advises Moon to not interrupt her ever again and Moon replies, "I'm not out here for advice. I'm out here to make a name for myself and what better way to do it than to beat the woman who beat Ronda Rousey at WrestleMania." The two are then interrupted by Bayley (who officially moves to the blue brand). Bayley also wants a championship opportunity, but as she stands toe to toe with Lynch, they women are interrupted by The IIconics, who take their opportunity to mock the other women. Paige then makes her way down the entrance ramp and before she can introduce the team that she will represent, she is interrupted by Sonya Deville and Mandy Rose. Instead, Paige introduces Asuka and Kairi Sane (moving to SmackDown) as the next Women's Tag Team Champions.

- Vince McMahon makes his way to the ring to announce "the future of SmackDown and WWE." It is none other than Elias, who makes his way to the ring with his guitar. The crowd is not pleased and while Elias begins playing  his guitar, he is interrupted by SmackDown's newest signee Roman Reigns, who proceeds to take out Elias and Vince McMahon, who takes a beautiful superman punch to the face. Reigns takes to the mic, "I don't care what he says. SmackDown Live is my house now."